Direct yourself to my new home at Buttons and Lizzy

same blog. new name. new location. I've imported all the posts from here, and from the original blogger blog.

So far I'm liking wordpress more than livejournal. Plus there are stats. and who doesn't love nifty little graphs and the like?

I'm trying to update more often, as you can see I've been doing ok for the past 3 days at least :D

i've been thinking about making this skirt for ages. just something simple, with an elastic waistband, green with white polka dots. i finally bought the fabric for it yesterday, from lincraft too, so it was a bit more expensive than it should have been (curse you little fabric stores for all being too far away and the city all too easy to get to!) and i came home, started cutting, sort of winging it.... and i forgot to make an allowance for my huge ass and now its not going to fit me!

at least i bought some extra so i will be able to make another that will fit me no problem. but still. i hate wasting fabric like that. serves me right for not sewing for so long and not thinking too much when i do actually go to sew again. 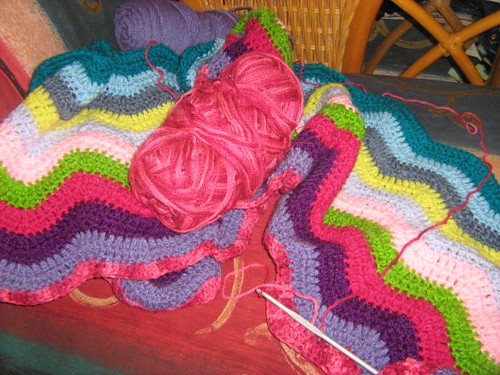 my creative space this week has been on my lap while watching tv. i've started working on my second ripple afghan again. i've also made a few more granny squares, but the afghan is what i was working on last night, so its still out.

currently i'm waiting for my friend maddie to give me a heads up to when she's coming round, not really sure what we're doing today. something. :D

firefox and i are having issues when it comes to bookmarking things. so here is a list of blogs i have been told to check out and i'm leaving the links here so i'll remember.

and since i've just started buying a heap of fabric again, heres a bit of how my stash has grown over the past few weeks. 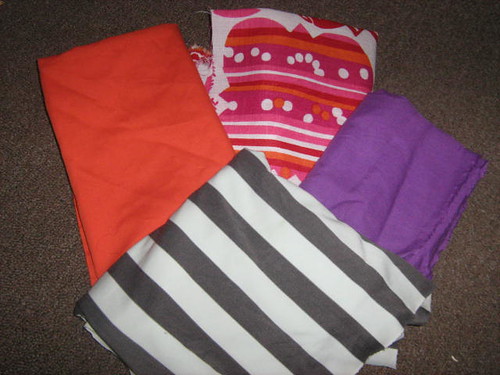 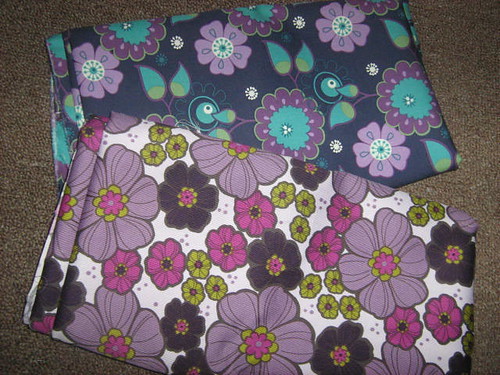 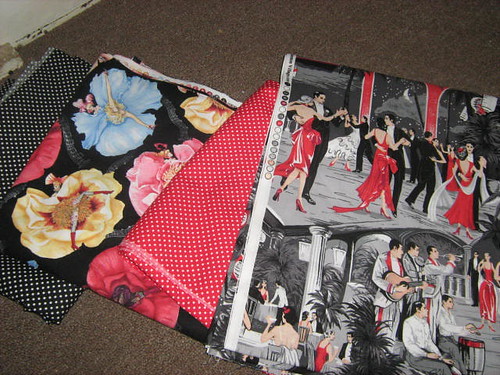 i've given my sister her gift so i can write up a proper post about it now :D 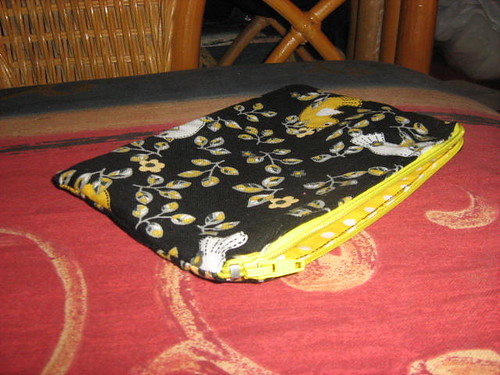 so here's the zipper pouch i made my sister. i didn't measure it so i can't tell you the exact dimensions, but i used a 7" zipper and it comfortably fits jo's ds in it, and she doesn't have a ds lite either. she's got one of those big hulking old ones. 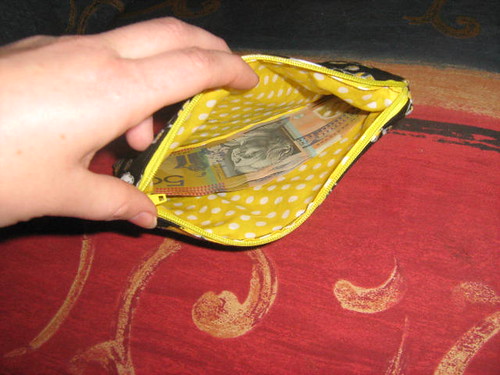 i got some nice things, some new stockings, pink jeans, and a lovely pretty dress. i just need an occaision to wear it out now. 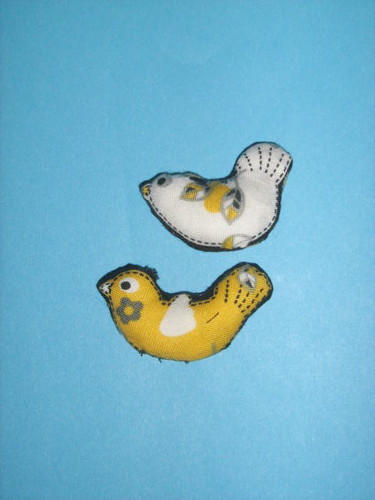 these are some little brooches i've made while watching tv. hand sewn, cut out from the scraps of the fabric from joanna's pouch. they're quite small and cute. i attached some safety pins on the back. 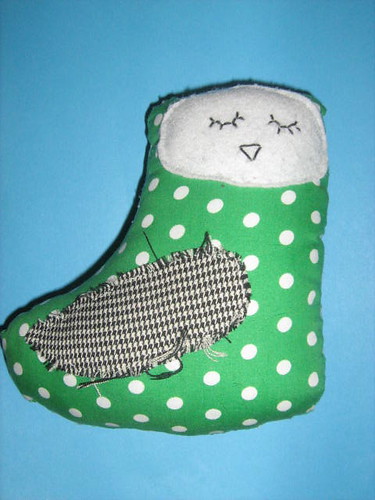 and the final finished project of the owl softie that i started working on so long ago. i actually finished the owl about a month ago, its just taken me this long to get a decent photo. i've been working on my photos as well. i like how these two turned out with the scrapbooking paper behind them.

i actually made something! i made a present for my little sister. jo (and i don't think she does) but if you're out there reading this... STOP! and nay, if you see it... don't spoil the suprise :D

So I haven't really done any crafting at all lately. I've been feeling a little down, so I've mostly just been watching movies. Trying to stick to the comedies.

However now that things are looking up again, and I've got a new sewing machine I'm on the hunt for a good tutorial for a cute full apron! I keep finding really cute half aprons, but i want one with a bib. its for my little sister, she likes to paint and requested that i make her a few cute aprons to wear when she paints.

I think this is a fair request, she's a pretty awesome sister. Always helping me out, taking me in when I have no where else to go, cooking yummy food for me, always there for a chat/shopping trip. This girl needs some pretty aprons.

Anyone got any good tutorials for me?

also how cute is soko! i forgot i had these mp3s on my computer. I think my favourite is 'i think i'm pregnant'. a song about fat bellies. hehe 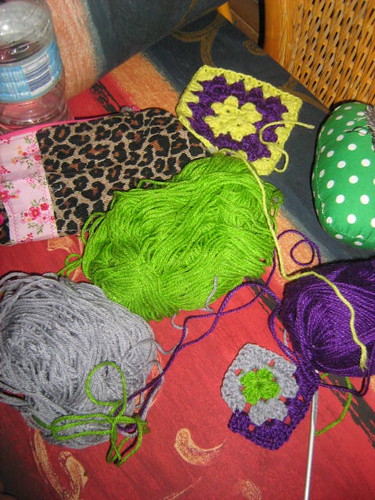 once again its on the couch. i'm just chilling out, listening to 4zzz (you can listen online now, for all you non brisbane folk!) and working on some granny squares before work this afternoon. you can see my water bottle and essential for me pretty much all the time, especially right now. and the owl softie, almost finished, stuffed but just needing to be stitched up.

i can't wait til my creative space can move away from my couch. i'm going to have to get some help organising myself though.

i'm feeling a lot better today which is good, my head is pretty much clear, i just have a slightly dry throat and feel like i have flem in my throat constantly. hopefully you're on your way out mister cold?

for more creative spaces have a look over at kootoyoo.

on an unrelated note i have been thinking about switching back to blogspot? i don't know though really. switching blog homes again? a bit disruptive really.

so its been a rainy day, an unsuccessful trip to spotlight, feeling sick and tired (damn cold!) and not going to work instead keeping warm under my doona. hopefully this will mean i'm alright to go in tomorrow. because unlike a lot of people, i really like my job, its like getting paid to hang out with my friends. and also make food for strangers.

i finished stuffing my owl softie that was seen in the last post. except now i can't find my white thread, so the opening is just pinned together until i a. find it or b. buy a new spool. which is very possible. cos thats how i roll. i'm a very disorganized girl.

just so this isn't all text only, i thought i'd post a picture of a place i quite like. the laundromat. 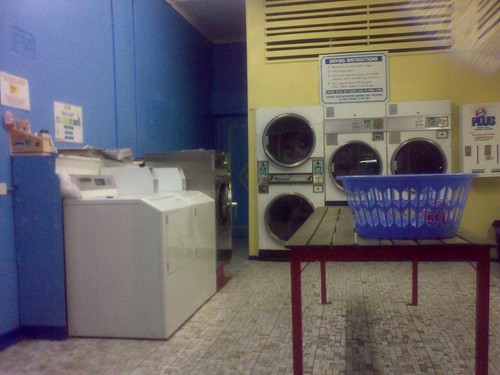 i don't go here enough, mostly because its expensive. also because theres other things i'd rather be doing. however i enjoy sitting in the laundromat, crocheting socks or writing letters. its a nice relaxing time.

i like all the fliers on the notice board. which you can't see in this photo. all the posters advertising bands and plays and selling exercise videos and brazilian bikinis and silly things like that.

i probably should be going to bed early since i'm sick and all. but i'm a night owl, so i probably won't be in bed for at least another hour. i'll try. 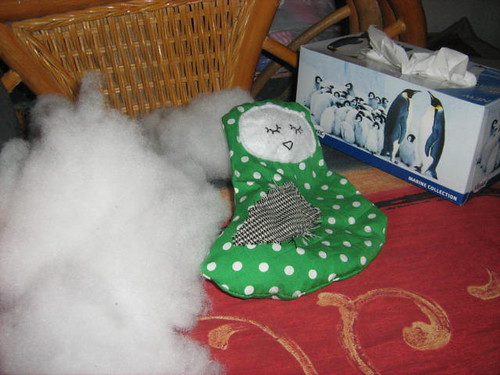 i'm wasting my day watching buffy on dvd (just started on season 6) and stuffing an owl i've been working on. i think she's going to be just for me. made from 100% cotton, acrylic felt for the face with freehand embroidered eyes and beak. the wing is made from some houndstooth i found in my stash, not quite sure what kind of fabric that is. she's handsewn. originally i wanted to make her using my machine, as i cut out the pieces a few weeks ago, but my machine is playing up again (i will be spending my stimulus on a nice new one i think, i've had it with my current machine). 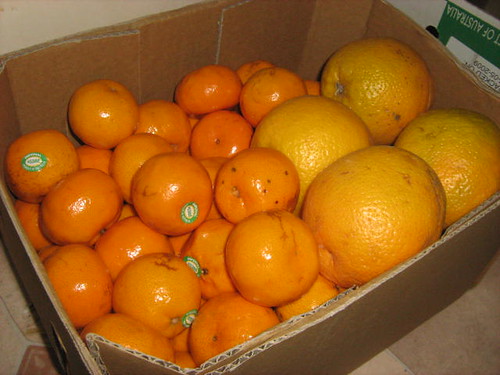 and just because its so orange and cheery, heres a picture of a box of fruit i bought very cheaply at the markets. they taste delicious too! just what i need for cold.

now to continue stuffing, make a granny square and then off to work! we'll see how i go tonight :D
Collapse